I have some sad news to share with you. 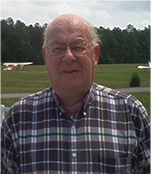 I received a phone call from Phyllis McLain that John McLain passed away on April 5, 2014 under the care of Hospice. He was diagnosed this past January with pancreatic cancer. He had a stroke on Saturday and Phyllis believes this is what caused John to succumb to a horrible, difficult past three weeks.

John was born in Pittsburgh, PA and went to prep school in Lawrenceville, NJ before attending Cornell University. There he majored in economics, played on the hockey team (when it was played outside on the river), and was an Army ROTC cadet. Upon graduation John served two years as a Logistics / Supply Officer. He learned to fly after his service in the Army.

John flew charter flights in Piper Apaches and Cessna 310s into and from NYC, flying executives from the Hudson River Valley and Long Island areas of New York. At one point he held the record for the “most takeoffs and landings in and out of JFK in one day.” He also flew and instructed students at SkyAcres Airport (44N) in Lagrangeville, NY, an airport along the Hudson River.

John came to Raleigh in the late 60s and was an instructor at RDU. He taught ground and flight instruction, but his primary mission was to teach ground school to a new level of application. John hoped his students would progress to the next level of learning and correlation. He then became an FAA DPE (Designated Pilot Examiner), wrote articles for The Southern Aviator, was an AOPA instructor, and began what is now known as the Pinch Hitter course. He and Larry Lambert, an FAA examiner, created the Wings Program in North Carolina. It became a model for other States in terms of a two day safety program for pilots. The Wings Program is still a success today. He attributed the lack of knowledge he experienced as a DPE due to rote learning and a “new style” of learning that included videos for ground school. Too many students were simply memorizing and not understanding the topic. His pet peeves were weight & balance, rudder application, pitch and power and the weather. These basics were so important to his style of teaching and learning. So many of us instructors were with John for his CFII renewal classes held four times per year in the Raleigh area. I was fortunate to help teach a few of those two day, 16 hour classes.

Prior to his retirement, John had accrued over 18,000 flight hours of which more than 13,000 were dual instruction given. He conducted over 4000 flight tests in his twenty-six years as a Designated Pilot Examiner.

John will be missed. He was controversial with many, but he will always be remembered as a teacher 1st, pilot 2nd. He loved teaching and I learned so much from his experiences that he mentored down and shared with all. John was 82 yrs. young at the time of his passing.

Take care my friend, keep your wings level, and butterflies in formation.

PS. A number of years ago John gave us permission to post all his articles from the Southern Aviator before their website was shut down. They can be found at http://www.empire-aviation.com/learn-to-fly/flight-instructors/john-e-mclain

If you have a particular story about John you’d like to share, please send me a note and we’ll update this page.