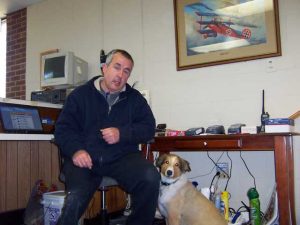 He was born April 3, 1966, in Berwyn, Illinois. Mike moved to Oxford in 1986 to pursue a career in aircraft maintenance. He received his aircraft mechanics A&P license from Nash Tech. After years of hard work under his mentor Neal Darnell, Mike eventually became owner and president of Air Cobra II at the Oxford-Henderson Airport.

Mike enjoyed having his special companions (his dogs) with him. He was a World War II history buff and has pieced together many puzzles which are on display at the Oxford-Henderson Airport depicting military aircraft. He is survived by his father, George Kellogg of Floral City, Florida, and his mother, Jan Barici (Don) of Williamsburg, Virginia.

Thank you to all who have helped Mike over the years in various ways. Mike was laid to rest in Williamsburg, Virginia.

A memorial gathering of friends will be held at the Oxford-Henderson Airport from 2 to 4 p.m. Saturday, Feb. 17, 2018, to remember Mike. Bring your favorite stories of him to share with others as family and friends gather to remember him.