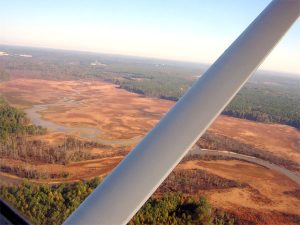 Turkey day is just around the corner and then its all out holiday season. Happy holidays from Empire, the instructors and all involved in flight here in the Carolinas.

We recently had 8″ of rainfall and our lakes and ponds, which we see everyday from the air, are completely topped off for the next few months. We were suffering from a severe drought and now there will be no water rationing as expected. Now just think what that would have meant with freezing temperatures. A half inch of rain equates to +2″ of snow and maybe ice?

And speaking of freezing temperatures, lets remain vigilant for frost and ice on aircraft. Remember the FARs (Federal Aviation Regulations). No known flight into expected, reported or forecasted icing. If you stumble into icing, no-flap landings are a must, because if you employ flaps on final with ice on the wings, you will stall. Do not attempt takeoffs with frost. Same effect! Interrupted airflow over the wings results in no performance or poor performance which leads to a “bad hair day” moment. Get good weather briefs, carry survival gear on those cold nights or into the northern reaches of the US and always file a flight plan and include flight following on those XC routes from A, B to C. Plan your flight, fly your plan, and fly smart!

Empire’s web site has a new, fresh look. We’ve transplanted the old site into the new templates and welcome your comments and suggestions.

Since our last newsletter …

Besides the normal maintenance and flights, nothing bad or good to report. We have again had “hanger rash” on our 172 and no has stepped up to the plate and take responsibility. Elevator and wing damage.

We are just finishing our Fall session with 16 people in attendance. We’ll have another class after the 1st of the year. Check the web for an exact date and info.

Have a great, safe holiday season, watch the calorie count and no drinking with driving … or flying!