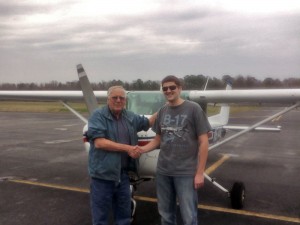 At the return to Oxford, Connor’s Dad was waiting to congratulate him.  Connor is a senior student at Wakefield High School.  After graduation he will attend NC State University for an engineering degree, but he is also applying for the Air Force Academy.  Connor knew that earning his pilot license would give him a leg up in the academy’s application process.

We are all so proud of this young man.  He is a high school student who paid for his lessons from wages he earned in an after school job. Here’s a photo of Connor after his first solo flight in N4844H on December 1st, 2012 at the Henderson-Oxford Airport (KHNZ).